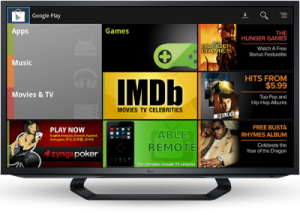 Google blessed American Google TV owners with the ability to buy or rent content from Google Play last month, and now it’s extending the same courtesy to international devices. The company has announced that Google Play Movies and Music will be available on the set-top box in the UK, Germany, and France starting from November 13th. It’s not clear if the content selection on Google TV devices will be the same, but if Google is expanding its licensing agreements to additional devices internationally, it stands to reason that a rollout to smartphones and tablets is next on the agenda.

While Google only announced three new markets today, an earlier Google+ post indicated that the expansion would also apply to Canada and Australia. The post has since been removed, however, with Google apologizing for the error. That might be disappointing for some, but the goof serves as an indicator that the company is clearly working on making content available on Google TV in as many countries as possible.

Necessary Sempre abilitato
Necessary cookies are absolutely essential for the website to function properly. These cookies ensure basic functionalities and security features of the website, anonymously.
Functional
Functional cookies help to perform certain functionalities like sharing the content of the website on social media platforms, collect feedbacks, and other third-party features.
Performance
Performance cookies are used to understand and analyze the key performance indexes of the website which helps in delivering a better user experience for the visitors.
Analytics
Analytical cookies are used to understand how visitors interact with the website. These cookies help provide information on metrics the number of visitors, bounce rate, traffic source, etc.
Advertisement
Advertisement cookies are used to provide visitors with relevant ads and marketing campaigns. These cookies track visitors across websites and collect information to provide customized ads.
Others
Other uncategorized cookies are those that are being analyzed and have not been classified into a category as yet.
ACCETTA E SALVA
Powered by